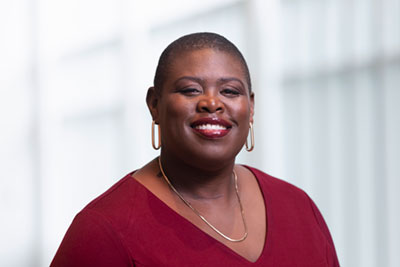 READ SOMETHING EVERY DAY. Great writers grow their understanding of words and their skills as writers by reading voraciously, and there's always time to do it while you're walking, eating, and taking care of personal hygiene. Next, try new things and meet new people.

Tamara Zellars Buck is a Professor of Mass Media, the Multimedia Journalism Coordinator, and the Chairperson of the Department of Mass Media at Southeast Missouri State University in Cape Girardeau. She was the first African American editor of Arrow, the university’s award-winning student-run newspaper, and since 2009, she has served as the paper’s faculty adviser. In 2013, she was named a Kopenhaver Fellow (inaugural class) by the Lillian Lodge Kopenhaver Center for the Advancement of Women in Communication in the School of Journalism and Mass Communication at Florida International University and the Commission on the Status of Women of AEJMC.

In 2016, she was a co-winner of the College of Liberal Arts Outstanding Teacher Award for innovations in teaching Diversity in Communication. She is a former newspaper reporter and public relations director who earned an undergraduate degree in journalism and master’s degree in public administration from Southeast Missouri State University, and a juris doctorate emphasizing intellectual property law at The University of Memphis.

Favorite writers/thinkers/artists: Three writers who have heavily influenced me are Zora Neal Hurston, Ida B. Wells, and Maya Angelou. These African American women were strong, independent thinkers, and I greatly appreciate their daring in telling culturally-relevant stories and speaking out in ways that improved their communities. I also love the fact that they never lost their own voices, own sounds, and told stories the way they wanted and when they wanted. I strive to be like them.

Inspired by: I am inspired by conviction, loyalty, creativity, love, faith, and family. I believe everyone is a storyteller, and everyone has a story worth telling. A great conversation with loved ones, strangers, and even adversaries can lead me to new ways of thinking, new projects, and new friends. It can also make me emotional, uncomfortable, or even angry. In the end, the things that inspire me help me to grow and make me a better person.

Advice to young writers: Don't fear the unknown; embrace it. People who have rich experiences can stretch their imaginations, understand different perspectives, and tell better stories.