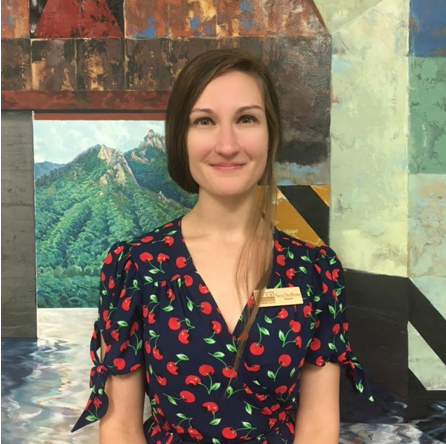 My advice is to MAKE LOTS OF ART! No matter the medium, create a ton. Just do it!

Sara Steffens is a St. Louis native who received her bachelor degree in fine arts with an emphasis in photography and a minor in art history from Missouri State University in Springfield in 2014, where she had the pleasure of working with a lead photographer in advertisement and a curator of a museum. Additionally, she attended a semester at Santa Reparata International School of Arts to study photography and mixed media in Florence, Italy, where she had an exhibition containing portraits of strangers she met on the streets of Italy.

Sara is currently the administrative assistant for the Jeanine Larson Dobbins Conservatory of Theatre and Dance at Southeast Missouri State University. She is the former director of the Arts Council of Southeast Missouri in Cape Girardeau. Before that, she was the director of the Perry County Historical Society. Sara was the Vice President of the KRCU Public Radio Community Advisory Board and a member of their Development Committee and a Board Director for the Missouri Association of Community Arts Agencies. In 2019, she was named 573 Magazine Art Person of the Year. She presented at the National Main Street Conference in 2018 on public art practices and place making.

When Sara is not at work, she is spending time with her husband John and their baby girl, Clara June.

Inspired by: Three things I am inspired by are the essays from Art in Theory 1900-2000, An Anthology of Changing Ideas, edited by Charles Harrison and Paul Wood. There are some great essays and notes in here. I read quite a bit and get inspired by quotes, essays, books. Art, of course, is a great inspiration. I also get inspired by people, where other people are at it their lives, in their journey. I like hearing the stories they tell and their experiences.

‍What is your advice to young artists? When I took my first college photography class, my professor told me, “Your first 1,000 photographs are going to be crap. So, go out and take lots of pictures!” Do not be afraid to try new things and get out of your comfort zone. Research and look at other work. Find what you like from other artists, writers, thinkers. Do not be afraid to ask questions. Go out and experience, or find a mentor who can give you hands-on work. Just create!